Grandmother Glenn was a grand lady.  A schoolteacher by profession, she was beloved by all.  She possessed a beautiful voice, a good mind, and a romantic nature.  I remember summers spent watching spiders spin their webs, singing with Grandma, and going through her schoolroom for books to read.

From an early age, Dad put me on an overnight bus from North Carolina to Alabama where Grandma lived.  Traveling alone was a great adventure.  Sitting behind the bus driver, I could watch the road from his vantage point, feeling like a 'big girl' as we made our way southward.  I’m quite sure my dad tipped him to watch over me, but back then, it wasn’t like today with pedophiles around every corner.

Grandma and Papa would meet me at the bus station and we would go 'home'.  The house was on a lovely street, one of the many in the small southern town.  A median about 20 feet wide ran the length of the street, separated by a convenient cut-through every block or so.  Graceful trees filled the median and gave much needed shade in the summer.  The house sat approximately 30 feet from the street with a porch that wrapped around to the left.  Two windows were visible from the second floor, that being a single room with a dormer.  The front porch had a swing in the left corner and plenty of comfortable rocking chairs. 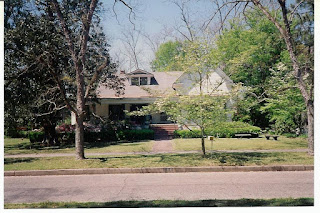 Grandma loved sweets and baked cakes and pies to make extra money.  She always had several ready for my arrival and I also had a sweet tooth, a very large one.  I sometimes slept upstairs and sometimes in the front bedroom.  There was no air conditioning, only fans and open windows.  I do not remember being hot.  Ah, the innocence of youth.

Papa was a real romantic.  The letters he wrote to her when they were courting are beautiful and poetic.  I can imagine the joy in her heart when she received them.  They were married December 26, 1912, when Grandma was 23.  Times were difficult and they worked hard to make ends meet like most their age.  Teaching was her calling and she taught first grade for 40 years.  Her classroom was beyond its time, without tables in rows like most.  She used round ones, giving her students a feeling of importance and her ability to walk among them, giving much-needed individual attention.  I loved my visits to her room, even though it was scaled down for the summer.  Not being much older than her students, I wished that I could have been in her room every year.  She also managed a hotel restaurant that had the reputation of being one of the best in town.  Her menu brought in many customers and she had a loyal following.

My times with her were sweet treasures. We would sing at the upright piano in the living room, and I would enjoy her and Papa singing in church on Sunday.  There was a chicken pen in the large backyard and we would go out every morning to gather the eggs.  She would protect me from the rooster who had a bad habit of spurring anyone he could.  One swift kick and he would make for the back of the pen.

Lindy, the cook, would come in the mornings to make breakfast on the wood stove in the small kitchen.  I loved watching her and would quiz her on how and why she did things.  One vivid memory of Lindy is the day she showed me how to kill a chicken.  I sat on the back steps, eager to learn.  She picked up a chicken and wrenched its head off.  The poor chicken’s body ran around for quite a few minutes.  Despite this horrendous sight, we continued to enjoy fried chicken every Sunday.

As I grew older, I continued spending the summers with Grandma and Papa.  It was a lazy, innocent time with them, peaceful and free from care.  When I was in the tenth grade, my family moved to Alabama and a year or two later, after Papa died, we moved in with Grandma.  What a delight.  Sweets whenever I wanted them and music as well.

She was happy in her later years with her grandchildren, her cats, and her flowers.  I will be forever grateful to her for giving me so much love and sweetness, which is what she was made of.  I will hold the image of her when young, dressed in a long skirt, white ruffled blouse, and dark hair pulled back in the style of the day, contrasted with her aged, portly frame, dressed in cotton gingham, hair white, and with those wise, sweet eyes clouded by time. 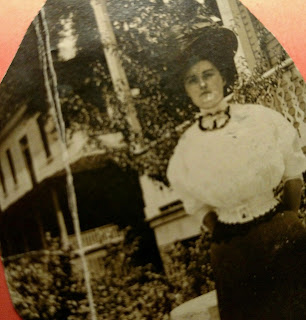 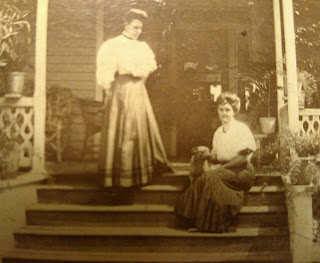 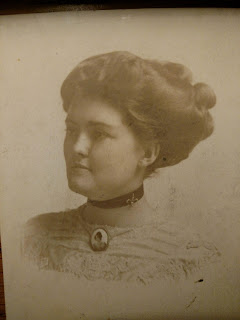 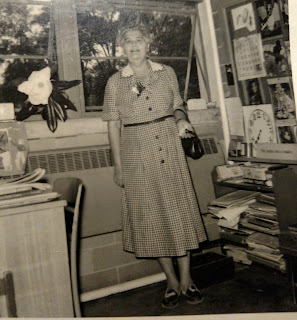 Posted by catnip at 7:56 PM No comments: Links to this post