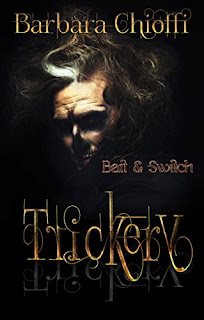 How about a little bait and switch? Three horror tales, each with a twist, three shifters with their own brand of terror. SILK, THIRSTY, and PREY will definitely keep you guessing. Intended for 18+due to adult content.


As they rode the elevator, Duncan pulled her close and with a swift movement, encased her in his strong arms and kissed her. All thoughts of home were forgotten as she leaned in, savoring the taste of him. When the elevator doors opened, she swayed from his touch as he took her hand and led her to the door. After entering and hearing the door close behind her, even in her confused state, she realized this wasn’t her apartment. “Wait, mine is down the hall.”

Duncan smiled, “I’m going to make you a cup of coffee, and then I’ll walk you to your door.”

Leading her to an expansive couch, he placed her down, stroking her cheek. Not having the energy to argue, Lauren sat, waiting for the coffee, slowly becoming aware of her surroundings. It was a typical bachelor pad in black, gray, and white tones with a bibelot or two providing a small amount of color. She could tell he was neat as nothing was out of place. In fact, the large space was practically devoid of furniture. The couch faced the windows and provided a view of the city lights that calmed her. A coffee table was directly in front, and a comfortable looking recliner was to the right. There wasn’t much else in the room except an odd-looking chest, standing in the left corner that resembled an antique of some sort with ornate carvings on the double doors. Beautifully crafted, it drew one’s attention.

Duncan watched her from the kitchen. Already enamored with her, he anticipated what was to come. Taking two mugs from the cabinet, he poured coffee into each one, adding a little something ‘extra’ to her cup, knowing it would dispense with her drunken state, but at the same time, allow his charm to place her in the right frame of mind. Remembering past conquests, he held his urges at bay, savoring the courtship to come.


Not being able to help myself, I asked, “Who are you?”Pursing her lips and with a malevolent tone, she replied, “My name is Morgana Kunig. I come from a long line of creatures you call vampire, although there is more to our kind than you could ever imagine. Born into a time of turmoil, my family stayed to themselves, venturing out when necessary and in darkness to feed. Humans were so terrified of what they could not understand. They caught and killed many of our kind before we learned to disguise ourselves, hiding away in large metropolises, blending in. Gradually, we were forgotten, relegated to myth and lore, lucky for us. I have lived for six hundred years and in that time have hunted humans for pleasure and when needed, for food. I find the human psyche so easy to control and rewarding to manipulate. You, my dearJames, have been especially satisfying and my desire for your blood is growing with every passing moment.”

My thoughts were uncontrollable and trying to move was of no use. Being encased in spider silk would have given the same feeling. Her long, tapered fingers stroked my cheek and I shivered. Her laughter echoed throughout the room as she drew nearer, grasping my chin in her hand, turning my head to the side as she took in my scent, licking my neck with her long tongue. 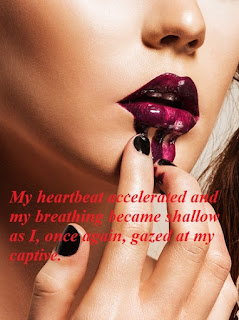 
Arriving at his home, Darren led Mika inside, taking her coat and placing it on the rack next to the stairs. The main floor of the house was tidy, consisting of a living room on the left side of the hall and a library on the right. At the end of the hall was a kitchen that spanned the width of the house, furnished with the barest of amenities. Having lived in his grandmother’s overly furnished house with every gadget imaginable, he needed very little to supply his needs. Besides, cleaning was not his favored activity. The less he had to tend to, the better he liked it.

Making a drink for each of them, he lit a fire, leading Mika to the sofa in front of the fireplace. Learning her surname was Mantodea, he wondered at the origin and learned it was an old family name, passed down through the years, the literal meaning being an order of insects. He mentally glossed over the explanation, and eager for the gratification to come, suggested that they go to his bedroom, noticing that she smiled with as much relish as he was feeling. Walking behind her up the stairs, he noticed her long arms and legs, the color of her skin, and the way her hair swung with each step, adding to his anticipation.

An expansive room was at the top, with its own bathroom, a perfect space for Darren. Another bathroom graced the other end over the kitchen. Having done renovations shortly after he moved in, he had transformed the two small rooms into one, loving the spaciousness. He had kept the fireplace, enjoying the warmth on cold winter nights.

Mika admired the surroundings as Darren lit a fire. Furnished with antiques, though not overdone, the ambiance was one of old world, calm and comforting. The bed was between two windows that faced the woods and the moonlight drifted in, providing an eerie light. Darren lit a few candles here and there, enjoying the ambient glow they provided. Turning, he took her glass, placing it on the bedside table and pulled her into his arms, finding her willing and reveling in her taste.

Look for my next horror collection, coming in early October.

Peace and thank you,