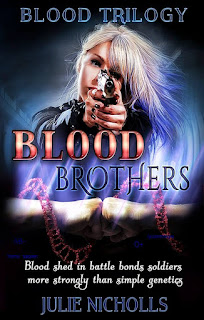 Hi!
I’d like to announce the release of Blood Brothers. This is the 2nd book in the Blood Trilogy. We have already followed the characters – K34GEN, Gabriel, Lyssa, and GH05T from book one, Blood Ties, but it seems their trials are not over yet.
Gabriel is pure lycan and was caged by Dr. Keller at Solgen Labs. Dr. Keller is a genetic scientist who used Gabriel’s lycan DNA to create the perfect soldier by splicing his genes with a human. K34GEN was Solgen’s top hunter…but then Keller realized he could improve the enhancements he’d given the human and created GH05T. She was faster and stronger than K34GEN, with a few added enhancements, and it meant K34GEN was no longer the top dog. The former hunter, K34GEN teamed up with Gabriel and together they attempted to bring down Solgen Labs.
The story continues in Blood Brothers. 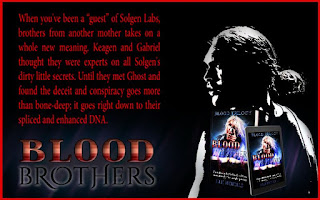 When you've been a “guest” of Solgen Labs, brothers from another mother takes on a whole new meaning. Keagen and Gabriel thought they were experts on all Solgen's dirty little secrets. Until they met Ghost and found the deceit and conspiracy goes more than bone-deep; it goes right down to their spliced and enhanced DNA.

“Your room’s better than mine.” Keagen pushed the door open wider as he edged his way into Ghost’s quarters. “I guess it’s a girl thing.” He snickered.
“Hey, if you want the pink duvet, take it,” Ghost quipped.
Keagen casually scanned the room while closing the space between them. He noticed the furrows congregating along Ghost’s forehead and blew out a weighty breath.
“I know what’s going on in there.” He pressed the tip of a finger to Ghost’s temple. The possibility she might be right and he should tell Gabriel about his condition was on his mind constantly, but finding the courage to admit he was imperfect wasn’t something he could do easily. He’d never concerned himself with the worries of others previously but seeing Ghost’s agitated expression bothered him. The realization that he could end up like K44 gnawed at him like a dog with a bone, and it was highly probable that this rabid dog would need putting out of its misery. Fear wasn’t in his vocabulary. There had never been anything he was afraid of…until now.
Ghost grabbed his finger and with pleading eyes stared at Keagen. She felt his pain. The possibility not only his body, but also his brain, might betray him was stinging—lacing him with more poison on an already infected wound. She wished he would listen to her and willingly let Lyra and Gabriel help, but the stubborn mask he wore wasn’t about to come off anytime soon.
They turned simultaneously to the sound of a knock on the door followed by Lyra’s soft voice.
“I’m sorry to disturb you. I know you’ve had a long journey, but Michaels wants to brief you on the current situation with K44.”
“It’s okay. We’re ready,” Ghost replied.
She released Keagen’s finger and moved toward the door, but Keagen halted her departure with a firm grasp of her arm. He pulled her close and let his mouth rest against her neck.
“I will tell Gabriel and Lyra about my problems…I promise.”
Ghost shrugged her shoulders. “It’s your business. I get that. I’m sure I’d feel the same, but it doesn’t mean I can’t worry about you.”
She smiled tentatively and headed out the door with Keagen following.
“Where’s Gabe?” Keagen directed his question to Lyra, who was already striding down the corridor.
She called over her shoulder and smiled. “He’s in recovery.”
Keagen charged forward and grabbed her arm, spinning her around. “From what?”
“The procedure.” She frowned. “Didn’t he tell you he’d agreed to give us the samples we need to help K44?”
“No, he didn’t.” Keagen scowled. “He said he wasn’t going to allow anyone else to experiment on him. What changed his mind?”
“You did,” Lyra replied and continued on to Michaels’ office after pulling her arm free and leaving Keagen standing with his mouth gaping.
Ghost sucked in a deep breath and braced. She approached Keagen from behind and stopped suddenly as he whirled around to face her. His furious expression greeted her.
“You told him…didn’t you?”
Ghost lowered her eyes. Before she could open her mouth to apologize, Keagen turned and followed Lyra to the operations room. Her eyes fell shut as she sucked in another large breath. She knew she’d fucked up. Her heart told her to chase after him and make him understand why she’d told Gabriel, but she knew he wouldn’t be interested. While something inside her said it was for the best, she felt guilty because she’d broken his trust.

Posted by catnip at 4:31 PM No comments: Links to this post