In her own words:

Hello, I’m author Thanna A. Setliff, and I have the first novel in a Paranormal Vampire Romance series completed, Defying Darkness (Worlds of Darkness Book One). First, I’ll tell you a little bit about me, then I’ll tell you about my Worlds of Darkness. I have held a variety of jobs from waitress to manager of a race shop. I have nine cats at home and four are mine. I am a romantic at heart, and live in a dream world as often as I can. I am now sharing those fantasies with readers, thanks to great mentorship from Barbara Chioffi. I have a love of all things fantasy and vampires in particular. 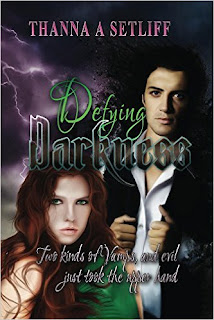 Dorian is a 2,700+ year old Scottish Vahmpyr Ranger, who fights the Vydi. Maire is a Vydi over 600 years old and running from Overlord Prince Vydi, Sergei. Sired by an Ohn’vydi, Sergei wants his favorite, escaped toy back and has acquired mysterious powers to obtain them.
Vahmpyr: A hybrid of human and Vahmpyree. Also a child of two Vahmpyrs. Plural is Vahmpyrs.
Vahmpyree: A blood drinking race of Extradimensional travelers native to Nekhylm and possessing many psychic, transformative and manipulative abilities. Plural is Vahmpyreen.
Ranger: an elite hunter of Vydi.
Vydi: Damned. Refers to spiritual state of humans recreated a vampires by a satanic pact.
Ohn’vydi: First-Damned. Originators of satanic vampire creation pact.


Máire is being stalked by her Sire, a serial killer unequaled who is using new, otherworldly powers. She, and her former pack, is also being hunted by Vahmpyr ranger, Dorian, whom she mistakenly thinks is an Archangel sent to punish them. Dorian is rapidly attracted to and perplexed by Máire; how does a Master damned retain its soul?--or is it a ploy to capture him? When she leads Dorian into an ambush, he thinks he has his answer, but then the starving vampire uses precious energy to save him. Now she won’t survive teleporting, necessary to elude her Sire, unless Dorian feeds her. Could that make him damned? She’ll die if he doesn’t. 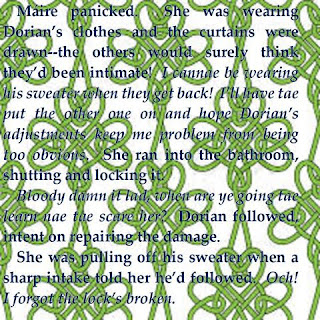 Just a glimpse at Dorian and a Vahmpyr's powers 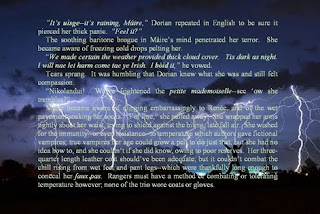 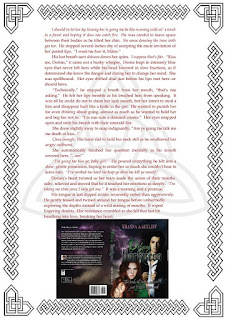 I’d like to talk about a nearly completed project now, the prequel in the World’s of Darkness, In Darkness Shining. It starts out with Nikolandui Antonis Verus, a Vahmpyr doctor and head scientist to the Vaelyzohn arriving for a prearrange marriage. Renée Celia D’Atrio is the Pyreen bride. Dorian returns as best man, and goes by Áengus while his brother, Antoni goes by Niko. Julie Nicholls will be doing the cover. She also did the one for Defying Darkness. Vaelyzohn: Leader of Vahmpyrs, Vahmeen, and Pyreens Pyreen: A human that mutates from drinking Vahmee, Vahmpyr or Vahmpyree blood. They also donate biochemicals and blood to Vahmpyric individuals. Vahmee: A Pyreen who mutated that somehow has powers very similar to Vahmpyrs. Plural is Vahmeen. 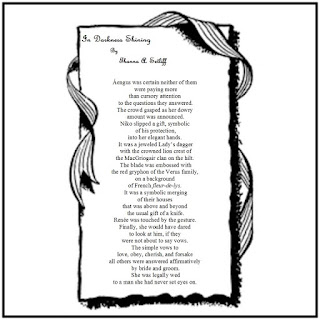 Available at myBook.to/DefyingDarkness and https://www.smashwords.com/books/view/611219, You will find my 4.8 rated debut novel, Defying Darkness for sale. Please read Elle Klass’ review of my book at http://thetroubledoyster.blogspot.com/…/defying-darkness-by…. Excerpt of interview: This story is more than a paranormal romance. The intrigue and suspense levels are off the charts. It's an amazing start and a fabulous debut for Thanna A. Setliff.