Book #8 in the
Blood Curse Series
(in eBook, print, and audio) 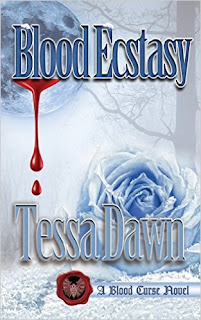 Some wounds run deeper than others.
Some tragedies never heal.
Some enemies just won't give up...
BLOOD ECSTASY ~ where the past and the present collide.

Julien Lacusta is a troubled soul, born into tragic circumstances, and raised in a violent time. Despite being a Master Warrior in the house of Jadon, and one of the most elite trackers the Vampyr have ever seen, he is damaged to the core: tormented by endless shadows, haunted by unseen ghosts. And he knows-by all the celestial gods; he knows-that if he ever releases those demons, the beasts that lurk within, there will be hell, fire, and brimstone to pay.
The very earth will suffer.
Rebecca Johnston is fighting hellhounds of her own: a stalker who won't let her go, an enemy she cannot defeat, a life that is no longer safe...or free. When she ventures into Dark Moon Vale to raise funds for a worthy cause, she has no idea that she is knocking on the door of fate. She has no idea that an ancient Blood Moon and an inescapable dark Curse are about to change her life.
Caught in a web of ever-increasing danger, the machinations of an ancient foe, and a burgeoning house of lies, Julien and Rebecca must summon their courage, face their fears head-on, and fight their way through the chemical allure of BLOOD ECSTASY.

Posted by catnip at 8:12 PM 4 comments: Links to this post