I AM PLEASED TO ANNOUNCE THE COVER REVEAL FOR 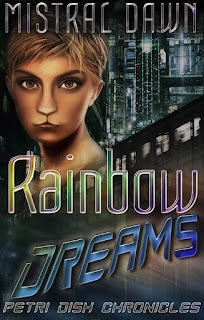 And here to tell you a little about her upcoming book is my friend, Mistral:

Guess what? It's finally here!!  Rainbow Dreams is now available for preorder from the following merchants:

Have you ever had a terrible secret you didn't want anyone to know? Petri does and it may get her killed. Life is hard on Upworld, especially for the residents of Under City, and it's even harder for those who don't fit in. Petri has alway been different and now those differences may cost her life. Her one hope is to leave the only home she's ever known while evading the mob that's calling for her blood. But Petri has never been outside of her sector of Under City, never mind off the planet. And the laws of Upworld forbid people like her from leaving. Will Petri overcome the odds and make good her escape? Maybe...with a little help from her friends.
Sound interesting?  Good!  And get a load of that cover!!!  It's courtesy of the FANTABULOUS Julie Nicholls!!  If you'd like to see more of her incredible work, check out her website here:

I also want to let you all know about an Amazon Giveaway I'm running for Captivated By The Winter King.  It's free to enter!  Rainbow Dreams won't be released until April 19th, so in the meantime you can get your sexy romance fix with some dreamy Fae! ;-)

Okay, okay, I know, enough stalling.  If you're as excited as I am about this story, I know you're all ready for a peek:

Lightning bolts of fire and ice shot up and down Petri's spine as she moved over the human man on the bed. Her short, slender body bowed with the sensations that washed over her. His lust was like a fountain of cold water on a hot day, and she was parched. It had been too long; she needed this. Desperately.

Looking down at him as she slid her body onto his straining cock, she smiled. This client had wanted to be blindfolded; he said he enjoyed the mystery. There was more mystery in Petri than most humans would know what to do with, so that was fine with her. With him blindfolded, she didn't need to be careful to keep her own eyes shut. This was going to be a good feed, and there was no way she could have kept her eyes from glowing.

The man moaned in pleasure. Being fed upon felt as good for humans as feeding did for Petri. None of her clients knew she sipped from their energy, their life force, when she fucked them. All they knew was that she was one hell of a talented dolly. A win-win for all involved.

This client was a regular; Petri had shown him many times how good it could be with her. Some of her regulars came to crave her, almost like the dream dust that was sold in the club below. They were guaranteed repeat business, and she always made sure to show them a good time. After all, that was her job.

The energy of the man's lust filled Petri as she glided up and down on top of him. She shivered. It was renewing, rejuvenating. She couldn't get enough. A few grains of dust remained on his upper lip as evidence of his earlier indulgence in some of the chemical delights that were available at Abracadabra.

It was clear her client was high long before Petri started feeding. Before she blindfolded him, she had noted the man's dilated pupils and the flush of pleasure on his face. She had no doubt the management of Abracadabra would go to great lengths to make sure he received the maximum enjoyment possible during his visit. There was a reason it was the hottest nightclub in this part of Under City.

The club specialized in hedonism in all its forms. Drugs of every description, games, gambling, and other, darker pleasures could be found within its walls. House dollies, little more than sex slaves, waited to fulfill the customers' every desire. Freelance dollies, like Petri, rented space to ply their trade as well. The house allowed it because the dollies offered the club's clientele more variety and were motivated to attract business. Once a patron had satisfied their lust, they often wandered downstairs in search of other entertainments.

Leaning down, Petri pressed her cat-like mouth to her client's lips in a sizzling kiss. Their tongues tangled as he responded, and she undulated her hips against his, faster and faster. The drugs he had consumed tainted his energy, giving Petri a pleasant buzz. She never took dust herself since it interfered with her ability to control her power, but she enjoyed the effect when one of her johns indulged. As their sex intensified, Petri drank deeper, swallowing down the man's whimpers and sighs of ecstasy as she swallowed his desire.

Lost in the haze of feeding for the first time in days, Petri didn't realize it at first when the man suddenly went still underneath her. His penis remained stiff and eager inside her, and she continued to ride it, draining his energy. It was only when the cold, clamminess of his skin penetrated the pleasurable trance she often sank into when feeding that she realized that she had gone too far. Her heart skipped a beat.

Swinging her leg over him, she clambered off his body and knelt beside him on the bed. She grabbed his shoulder, shaking him, but there was no response. He was as still and cold as death.

Petri's breath froze in her chest as she tried to suppress her rising panic. She slapped him, hard, across his face, trying to provoke a response. There was nothing. Leaning down, she put her ear against his chest, listening for something, anything. Any sign that a spark of life remained in the man. She wasn't sure, but she thought she might have heard a faint fluttering within.

Taking a deep breath, she closed her eyes and put her hands on his chest, fingers splayed. She had never done this before, but her instincts said it might work. The process of drawing energy from others had come automatically when she reached physical maturity. It was as natural as breathing to her. But reversing the flow of energy… That was something else altogether. She forced herself to focus; all she could do was try.

Reaching down into the well of energy within her, Petri tried to snag a wisp of it. It was like trying to catch fog. Gritting her teeth, she concentrated and managed to grab a small piece of the mist and tease it up, out of herself and back into the man. It flowed at a slow trickle, but it did flow. The man took a deep breath and Petri slumped in relief.

Before she could stop him, or even turn away, the man reached up and snatched the blindfold from his face. When he saw her glowing eyes, he shrieked, "Mgeni!"

Petri swore. She knew she didn't have much time. Sitting up, she sucker-punched her client hard in his stomach. The man folded over, clutching his gut, just like she knew he would. As her former client coughed and wheezed, Petri scrambled into her tight, red mini-dress and stiletto pumps and clambered out the window. She couldn't risk trying to make it through the crowded club below; she needed to be gone before the man recovered enough to sound the alarm.

Whoo! I guess she's in some trouble!  Want to find out what happens next?  Reserve your copy today so you'll get it without delay on the 19th! ;-)  Thank you all for stopping by today and for your interest in my first foray into the sci-fi genre!!  Have an awesome rest of the week!

Posted by catnip at 12:04 PM No comments: Links to this post