Today's spot goes to the very talented Julie Nicholls. The Fallen Angels series has had a makeover, both stories and covers. This powerful series, in my estimation, was outstanding as it was, but now is far beyond that mark. 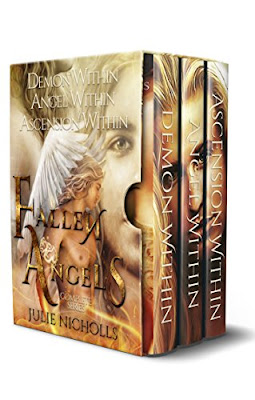 This 3 in 1 eBook contains Demon Within, Angel Within, and Ascension Within.
In Demon Within, Kai, who was sold into slavery at the age of six by his mother, learns that killing brings rewards. Raised by slavers and put in the fighting pits of Darkmide after they learn he has something inside which makes him invincible in battle, they use him for sport. Following years of servitude at the hands of the slavers, Kai breaks free and mounts a rebellion, earning a reputation as a powerful Warrior. An alliance between a king sets him on a path he could never imagine. After meeting the king's daughter, Eloise, they build a relationship and discover secrets about themselves and the world around them. The second book, Angel Within, brings more trials for Kai and Eloise, and a powerful witch joins forces with a mercenary from their past to bring forth the most powerful of all Fallen Angels, Samyaza. Book three, Ascension Within... the conclusion of this story gives us all the answers we've been waiting for. The angels have been playing a game, one that could end all humanity. Will the mortal world survive the game played by powerful angels?

This Fallen Angel Series is a new and alternate addition to the fallen angel tradition of Sylvia Day and J R Ward.

Get your copy here:

Posted by catnip at 1:37 PM No comments: Links to this post