My great-great-great grandfather was born in North Carolina in 1786. At the age of 20, he moved to South Carolina and was admitted into the Methodist Conference. The following year, he was ordained a Methodist minister.

After his marriage, he moved to Alabama and built a fortified house for himself and his family. The town,  Glennville, named for him, developed over time and was known in its heyday as the "Athens of the South". It had collegiate institutes, finishing schools, a military academy, classic churches and stately homes. In 1854, John Glenn, cousin to James, left to establish a school at Auburn and became its first president of the board of trustees. This school in successive changes became Auburn University.

"Rev. Glenn had a full-rounded face, a florid complexion, a voice like a trumpet and 'faculties naturelle of the highest order'. Being an ordained Methodist preacher, he began his search for a congregation.

Mr. Glenn made repeated efforts and failed. One of the peculiar notions of the people and the only one on which there appeared to be a uniformity of faith, was the belief in witches. He resolved to take advantage of this fact, and in due time, was heard throughout the settlement, for miles in every direction, by written posters over Mr. Glenn’s own signature, and by public announcement, that he, on a certain day, at a certain hour, at a certain place, would publicly proceed to kill witches.

There was no cabin or other dwelling large enough to hold the crowd, which gathered for the exhibition. His method of killing witches included drawing of a witch’s picture into which he shot golden balls. His pictures included infidelity, drunkenness, and other vices. After that service he could draw a crowd from a twenty-mile radius at any time."

"Mr. Glenn was very much given to walking long distances. It was March, 1851, and he wanted to walk the two miles to the church, give his sermon, and return home. His family persuaded him to ride a gentle old horse.

After the service, he began his journey. As he rode down a steep slope, a hog jumped out from the brush, scaring the horse, which bucked, throwing him against the pommel of the saddle, injuring him so severely that he died several days later." 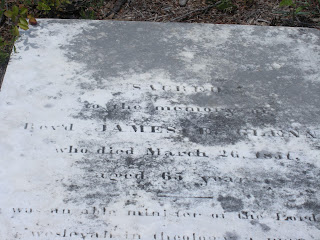 He was buried in the Glennville cemetery and his wife, who died a few years later, rests beside him. The town he founded disappeared into history a few years after his death. Refusing to allow the railroad to go through brought about its demise. A few of the stately homes are present as museums, and the restored cemetery remains as a reminder of the souls who lived there. 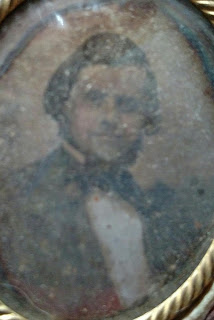 Posted by catnip at 12:43 PM No comments: Links to this post