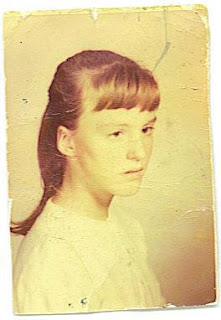 They had been so very careful. The new bridge where the children were gathering bugs for their biology projects appeared secure. If the children were alert, they would be safe.
Around 7:00, Mama drove my sisters to the bridge. Carrie only needed five more bugs for her science project, and the twins were anxious to help. Parking on the grass and giving her children last minute instructions to stay off the highway, Mama settled to read. Other children were there also. Mama could hear them shouting to each other as they found their prizes. She smiled, for they were all so perfect and dear, each in their own way.
She heard a new sound, and as it drew closer, she became apprehensive. A car passed her, traveling at a high rate of speed, and she could see two men in the front seat, one wearing a hat. It all happened so fast. Hearing a horrible sound, Mama immediately left her car, running onto the bridge. She could see a man kneeling over a small body on the pavement. The man said repeatedly, “What have I done?”
Her heart stopped, and she began calling her children. “Carrie, Ellen, Marie?” One of Carrie’s friends ran up, then Carrie and one of the twins. Mama called for her missing child. “Ellen, Ellen?”
Carrie’s friend said, very softly, “I’m so sorry.”
Time stopped for mother. She ran, pushing the man away, and knelt by her child, feeling for her heartbeat. Ellen was so small, lying there on the pavement, her face turned to one side. As Mama stroked her cheek and ran her hand down her neck, she stopped, for blood ran down the road in rivulets. She refrained from turning her child's head, not wanting to see the destruction. She told Carrie and her sister to sit on the curb, covering the small body with her own, trying to spare them from seeing what she had seen.
A police car pulled up. Two officers emerged, and their only comment was, “How are we going to get him out of this one?”
They made no move to see who the child was or to help the woman kneeling over her body. The man who hit my sister was a local firefighter and had been drinking, wishing only to scare the little girl by the side of the road.
The police called an ambulance to take my sister to the hospital, telling Mama to wait for her husband. She knew it was no use going in the ambulance. My sister had died instantly from the impact. Carrie’s friend called my father, and when she told him what had happened, he put the phone down and ran out of the house, down the middle of the street.
A cousin picked him up and took him to his car. At the bridge, Daddy hurriedly collected his family and drove to the hospital, blowing the horn all the way. Mama said, “Darling, don't hurry. It's too late. She’s already dead.”
At the hospital, the family doctor and assisting nurses were around the small body, wanting to do something to ease the agony. Mama went over to the table where my sister was lying. She wanted to say goodbye to her child.

Time, if you let it, heals many things. The pain of remembering is still there, only more bearable. After two years of torment, Mama sent a message to her spirit child. “I'm going to forget you for a while, or I will not be able to continue.” She returned to us, giving love absent too long.


Posted by catnip at 4:44 PM No comments: Links to this post